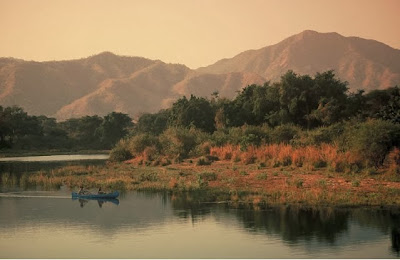 A portion of the Zimbabwe bridge was previously lit with 800 W high pressure sodium lamps, but these not only have a short life span, their electricity consumption is also very high. In comparison, an LED solution consumes 60% less energy. Each light uses 290 watts of power at full output, steady state, yet they are able to throw the light over 200 metres.
Installation began in mid-2013. A lighting retrofit of this magnitude would usually take three to four months from sourcing of specialist lighting products to the final handover and switch on as most of the items need to be sourced and shipped from around the world.
With a 100,000 hour life span, the lights will illuminate the bridge for 15 years plus if burned for eight hours a day. After this, they will still produce 50% of their light output. As it is a working bridge, it is subject to strong vibrations from large trucks as well as trains. It was therefore not feasible for the floodlights to be attached to the bridge structure itself as the constant vibrations would quickly reduce the LED’s life and premature failure.
This was also not your typical architectural illumination project as it involved working in unusual, uneven terrain. The SSLI installation team creatively used security fencing on which to attach the LED floodlights, supporting accessories and cabling.
“Each weighing 34 kg, the project required 12 LED floodlights – also referred to as solid state lighting technology. The local bungee jump team helped to safely lower these heavy lights down the ravine and into position,” Ross Blakeway director of Solid State Lighting International, says.
The 12 floodlights are positioned at the feet and sides on either end of the bridge, six in Zambia and six in Zimbabwe. A controller and a wireless emitter are positioned on the Zimbabwe side and all information is communicated digitally across the gorge to a WiFi receiver that communicates with the floodlights on that side, thus eliminating the need to run expensive and heavy cabling across the bridge span. The line voltage and control data is merged so that each spotlight can be communicated with on a standard cable which also simplified installation and lowered the total system cost.
These high performance LED lights are also able to produce an extensive array of saturated colours which are significantly more cost effective than traditional light sources for installation, operation and maintenance.
Source: LEDs used for Victoria Falls bridge (24/01/14)
Posted by VFBNB at 01:53 No comments:

THE Victoria Falls Safari Lodge has opened six safari suites following a recent increase in occupancy rate at the property.

“The Victoria Falls Safari suites are a perfect choice for families and small close–knit groups who seek stylish comfort, flexibility, privacy and space all within four kilometres of the mighty smoke that thunders, Victoria Falls,” he said.

Kennedy said 2013 was their best year ever after increased occupancy at its flagship Victoria Falls Safari Lodge as tourists returned to Zimbabwe’s shores.

A room night is one hotel room occupied for one night, a statistical unit of occupancy while a bed night is a measure of occupancy per person per night.

“The future is bright for the country and we anticipate even more arrivals as we start 2014,” he said.
AAT started operating in 1995 and its portfolio includes Lokuthula Lodges also in Victoria Falls and Ngoma Safari Lodge in Chobe, Botswana.

The country’s profile was boosted following the co-hosting of the 20th United Nations World Tourism Organisation (UNWTO) general assembly by Zimbabwe and Zambia in Victoria Falls and Livingstone in August last year.

Tigerfish predating on swallows in mid-flight

African tigerfish have been filmed by scientists catching swallows in flight.
Some species of fish are known to feed on stationary birds but experts say this is the first evidence of one catching birds on the wing.
Tigerfish are a predatory freshwater species that are best known for their large, razor-sharp teeth.
The behaviour was filmed at Schroda Dam, a man-made lake in Limpopo Province, South Africa.
Researchers from the Water Research Group of North West University, South Africa, described their findings in the Journal of Fish Biology.
"The African tigerfish is one of the most amazing freshwater species in the world," said Prof Nico Smit, co-author of the study.
"It is a striking fish with beautiful markings on the body, bright red fins and vicious teeth."
The fish, Hydrocynus vittatus, is known as a voracious predator and according to Prof Smit, its characteristic jump makes it a favourite species for freshwater anglers.
It is a protected species in South Africa and Prof Smit and colleagues were conducting a study into how it uses different habitats in Schroda Dam.
Using radio tags to monitor the movements of individual fish, researchers found that they primarily fed on other fishes at dawn and dusk and withdrew to rest in deep, sheltered areas during the day.
But during a summer survey, the team recorded some unusual activity. The tigerfish swam out to open water in the mid-morning and were seen preying on swallows as they skimmed over the lake's surface.
Prof Smit said the team were "extremely surprised" by the behaviour which they were able to capture on film.
In the past, anecdotal evidence of birds disappearing as they flew over African lakes and pools has suggested that fish could be catching them for food but nothing conclusive had been recorded.
Bass, eels, piranhas and pike have all been acknowledged as freshwater species that prey on birds floating on the surface of the water or by the water's edge, but Prof Smit says this is the first record of freshwater fish catching birds in flight.
He suggested that the findings will change how scientists think about how energy transfers in freshwater eco-systems - and may also have implications for swallow conservation in the country.
Source: African tigerfish catch swallows in flight (BBC Nature, 13 Jan 2014)
Posted by VFBNB at 13:38 No comments:

Statistics from the authority showed that of the 16,573 tourists who paid to explore the rainforest in the 10 days to January 2 this year, just over 5,000 were from outside Africa.
In terms of earnings, the international visitors spent $147,510 at the rainforest while tourists from regional countries paid $75,410 while earnings from locals, who pay less than their foreign counterparts, stood at $49,709.
There were no comparative figures available, but tourism executives told The Source that the just ended festive season was among the best for the industry.
The rainforest had an average 542 daily visitors in 2012, according to Zimbabwe Tourism Authority statistics, compared to nearly 1,700 daily visitors over the peak 2013 Christmas season. A total of 198,000 toured the rainforest in 2012, according to the ZTA.
“The festive season was made of two halves- the Christmas period had more locals while the New Year period had more of regional and international tourists. All these helped in raising arrivals into this destination,” said Hospitality Association of Zimbabwe official, Jonathan Hudson.
Tourism executive Clement Mukwasi said the rise in tourists could be attributed to the global exposure generated by Zimbabwe’s co-hosting of the 20th United Nations World Tourism Organisation (UNWTO) general assembly with Zambia.
“I think we are seeing some rebound as a result from the (hosting). This can help the sector recover in 2014,” Mukwasi said.
Tourism expanded by 3.4 last year, but is seen by growing by 15 percent by 2015. Zimbabwe earned $749 million from tourism in 2012, a 13 percent increase on the 2011 figure of $664 million.
Source: Vic Falls rainforest draws 17,000 visitors over festive period (10/01/14)
Posted by VFBNB at 10:39 No comments: