Despite designation as a UNESCO World Heritage Site, the unique flora and environment of the Victoria Falls rainforest is once again threatened by further tourism development with a new proposals from Zimbabwe based companies to operate tours to Cataract Island - on the very edge of the Falls themselves.

Cataract Island (right and centre) with the main falls behind

Applications have reportedly been made to the National Park authority by several local Victoria Falls tourism companies bidding to be allowed exclusive access to use the island for tourism purposes. There has been no public advertisement or comment on the proposal by Park officials.

Cataract Island is one of only two islands which break the width of the Falls. Livingstone Island, located on the Zambian side of the Falls, has been a popular tourism draw-card in recent years, including the opportunity to bathe in the 'Devil's Pool.' Visitor numbers to the island, however, are strictly limited and controlled to minimise environmental impacts.

Cataract Island lies on the Zimbabwean side of the Falls and is the only area within the immediate vicinity of the Falls which is currently inaccessible to tourists. This protection from disturbance has meant that the island has become a valuable refuge for biodiversity, nourished by the ever-falling spray from the Falls.

The idea of tours to Cataract Island is not new. Soon after the arrival of the railway and construction of the Victoria Falls Hotel in 1904, Percy Clark, the self-claimed first settler at what would become the tourist town of Victoria Falls, was already running trips to the island by Canadian canoe. Clark operated from a landing stage halfway along what is now known as Zambezi Drive.

In the years that followed the Victoria Falls Hotel took over the management of the tours, and for many decades trips were offered to Cataract Island along with upper river cruises and trips to the north bank. There was, however, no development on the island itself, apart from the tying of a simple bell to an overhanging branch and by which tourists could summon their canoe and return to the south bank.

The island tours operated until the early 1960s, when the Hotel boat facilities mysteriously burnt down, destroying the Hotel's boats and bringing to an end operations from the landing stage. New commercial jetty sites were relocated further upstream and Cataract Island left to recover as a protected refuge for wildlife, disturbed only by the grunts of resident hippopotamus and actions of the occasional visiting elephant. 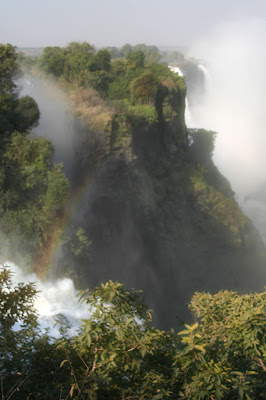 Tourist numbers to the Falls in those days were a only a fraction of the estimated 200,000 visitors who now who visit the side of the each year. Guest numbers at the Victoria Falls Hotel averaged at less than 5,000 per year during the '20s and '30s (rising to 10,000 a year by the early 1950s and the opening of ).

In 2011 local tourism operator Wild Horizons considered launching tours to the island. Strong local opinion against any development or commercial use of the island resulted in the company agreeing not to operate tours on the understanding that the island would remain a protected refuge. A subsequent application for utilisation of this site by another company was reportedly turned down by Parks citing the ecological sensitivity of the site.

The tourism industry and residents in Victoria Falls appear united in condemning the latest proposals to develop tours to the island. Their concerns appear mostly to be focused on the visual impacts of tourism activity on the island, which is the focal point of many viewpoints from within the Falls rainforest, and the resulting impacts on the visitor experience of viewing the Falls.

Yet the strongest possible argument against operating tours to Cataract Island must be the impact that visitors will have on the fragile ecology of the rainforest flora and fauna. Historically the island is also of cultural significance to the local people of the Falls, used to make sacred offerings to the ancestor spirits who inhabited the mists of the Falls in the gorge below. Cataract Island is the last, isolated fragment of the Falls rainforest which is left wholly undisturbed, and must surely remain so.

The core area of the Victoria Falls was designated a World Heritage Site by the United Nations Educational, Scientific and Cultural Organization (UNESCO) in 1989. The listing described the Falls as ‘a superlative natural phenomenon with exceptional natural beauty and aesthetic importance,’ with the governments of Zambia and Zimbabwe pledging to keep the natural environment ‘intact for future generations.’ 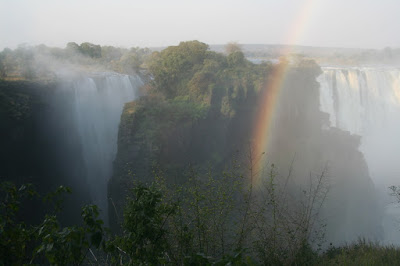 An extended version of this article can be found on www.safaritalk.net
Posted by VFBNB at 22:12