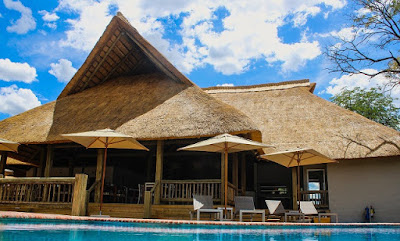 SHEARWATER Adventures, one of leading tour operators in the country, has built a new look 150-bed lodge in Victoria Falls at a cost of $1.2 million.

Construction of the Victoria Falls Explorers’ Village began four months ago and the facility is already operational on a trial-run ahead of its official opening early March, the company’s public relations manager Mr Clement Mukwasi said.

The grass thatched facility, located behind a curios market towards the Victoria Falls Bridge boasts of outdoor camping comprising 60 tents and 16 chalets.

Mr Mukwasi said the idea of venturing into accommodation provision was in response to an anticipated increase in arrivals in the resort town in view of major infrastructure development such as the Victoria Falls International Airport.

“This is our first accommodation facility as Shearwater as we have been running activities based tourism. Now because of widening scope brought about by developments in infrastructure, we are now in a golden triangle where we now operate in three countries Botswana, Zambia and Zimbabwe whose activities are common to each other,” he said.

Mr Mukwasi said after doing a needs analysis, the company noticed a gap in accommodation especially in the form of camping facilities.

“When the Victoria Falls International Airport was being refurbished we projected an upsurge in arrivals hence we have been watching the market. This is a budget accommodation facility targeting overlanders who have been opting to camp outside the country because of lack of such facilities and now they will be sleeping over in Victoria Falls,” said Mr Mukwasi.

Tourists have over the years been reportedly doing activities in Victoria Falls and crossing the border to sleep in Botswana or Zambia where accommodation is said to be on the lower side.

Camping at the new facility costs $15 while a bed in the chalets cost $120 and below depending on size including bed a breakfast.

“There is also a restaurant, souvenir shop and bar. There are 60 tents at camping site with 120 beds. We copied the concept elsewhere especially in Namibia and improved it. There are also 16 chalets with 32 beds and we will be adding 32 more beds,” added Mr Mukwasi.

As part of corporate social responsibility, he said Shearwater Adventures has extended help in reconstructing Sinathankawu Flea Market next to the lodge into a new look world class market with 140 stalls.

Mr Mukwasi said they were also helping sell the curio market to clients so they know where to go than to fall prey to curio touts. About 30 people are already employed at the new facility with the number set to increase.

Speaking on the sidelines of the re-opening of The Boma — Dinner & Drum Show in Victoria Falls recently, Africa Albida Tourism (AAT) chief executive Mr Ross Kennedy implored players in the sector to monitor the demand and supply market forces.

While Zimbabwe is one of the world’s acclaimed tourism destinations, he stressed the need to understand the changing nature of clientele as competition is getting stiffer.

“As tourism players and related suppliers we should know we are competing with other destinations hence the need to understand that we should deliver. If we deliver mediocre we don’t get business,” he warned.

“In this business we have to stay abreast of what the public wants and be very alert and much focused on world trends and standard quality. We should understand that competition isn’t only local but regional and international as people look elsewhere once they don’t get value for their money.”

Mr Kennedy said the tourism and hospitality industry needs to respond to client and experiences in all dimensions. The Boma- Dinner & Drum Show is one of the most successful restaurants in the country. Mr Kennedy said 2017 looked brighter in the food industry. A majority of guests at The Boma- Dinner & Drum Show come from US, Australia, UK, South Africa, Japan and locally. Mr Kennedy said the buffet, food presentation and preparation have been redone to include more traditional foods.

The restaurant is everyone’s choice for dinner in Victoria Falls, especially tourists regardless of where they are booked. It now has in addition, a photo booth and numerous artistic activities. Mr Kennedy said more than a million guests have been hosted at The Boma with more than 60 000 tourists being treated to goodies last year alone.

AAT is a Zimbabwean hospitality group with a portfolio of hotels and restaurants in Zimbabwe and Botswana. Its flagship property, Victoria Falls Safari Lodge, has been voted the Best Safari Lodge/Resort Hotel in Zimbabwe for the last 20 consecutive years by the Association of Zimbabwe Travel Agents and has received numerous international awards over the years.