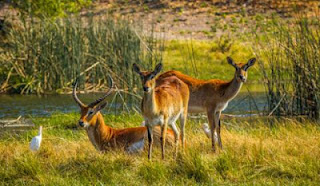 When David Livingstone reached Linyanti on the banks of the Chobe in 1851, he not only found the upper reaches of the Zambezi, but also large numbers of a species of spiral-horned antelope specially adapted to the seasonally flooded marshlands, the lechwe (Kobus leche). Livingstone had been the first to describe this species to science when he became the first European to reach Lake Ngami in 1849, and he later discovered another subspecies when he travelled upstream and into Kafue Flats.
Read more: The Zambezi Traveller: Livingstone's Lechwe
Photo Credit: Zambezi Traveller