At least 12 tourists escaped with minor injuries in Victoria Falls yesterday after a National Railways of Zimbabwe goods train rammed a tram late in the afternoon. 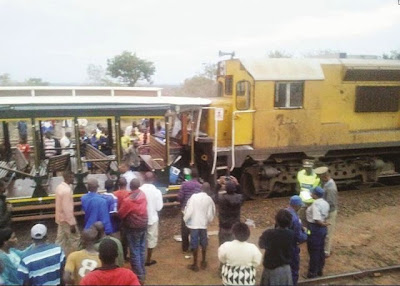 NRZ public relations manager Fanuel Masikati confirmed the accident, but said details were still sketchy. "Yes, there was a train accident in Victoria Falls," he said. "We are still to get more details from our man on the ground. As it stands we are yet to know where the goods train was coming from or if it is ours or not."

Victoria Falls mayor Mr Sifiso Mpofu said he arrived at the scene when the victims had been taken to a hospital in the resort town. "Twelve foreign tourists have escaped... with bruises," he said. "Their condition is stable."

Police in Victoria Falls confirmed the accident, but could not give more details.

Witnesses said the tram was hit by the goods train just as it was about to take off after picking up tourists for a tour. "It was around 5pm when the tram was hit by a goods train," said a witness who requested anonymity. "The guide who works for Victoria Falls Steam Train Company -- the company that runs the tram - jumped off when the accident looked imminent and escaped unhurt." The source said the injured were rushed to different health institutions in the resort town.

The tram derailed last year but no tourists were injured. Tour operators suspect that a signals fault caused the accident.