Vice President Retired General Dr Constantino Chiwenga has presided over the ground breaking ceremony of $1.2 billion worth of investment projects in Victoria Falls which are set to transform the resort destination as a competitive international tourist’s destination and spur earnings as well as tourists traffic. 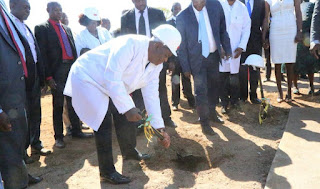 The four-pronged investment to be implemented by Dubai headquartered firm, Feonirichi will see the construction of a grand prix circuit, a convention centre, a shopping mall and a state-of-the-art medical resort.

The investment, which has been accorded the national project status and is set to be afforded special tax incentives, marks the pioneering projects for the Victoria Falls special economic zone.

The project was mooted during the 2018 Arabian Travel Market and three months down the line, a ground breaking ceremony has been held to mark the commencement of the initiative.

Vice President Chiwenga said the mega project is set to position the resort town, which is currently enjoying record numbers as an attractive destination, ensures product diversification and unlocks the full potential of the tourism sector.

Feonirichi Group CEO, Mr Prince Adebayo said the firm is privileged to be afforded a chance to contribute to the growth of the local tourism industry and announced that the hospital will offer free services for expecting mothers and children below the age of 13.

The Minister of Tourism and Hospitality Industry, Prisca Mupfumira and the Minister of State for Matabeleland North Provincial Affairs, Ambassador Cain Mathema said the investment is a result of the Zimbabwe is open for business drive and expressed confidence that it will set the tone for more investments into the special economic zone. 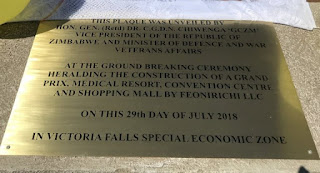 All the projects are expected to commence soon after the finalisation of the environmental impact assessment.

The convention centre is expected to ensure that the country bids for major international events while the grand prix circuit is set result in hosting of major motor racing events.