Lookout Café in Victoria Falls was on Christmas Eve reduced to ashes by a fire suspected to have been caused by an electric fault. 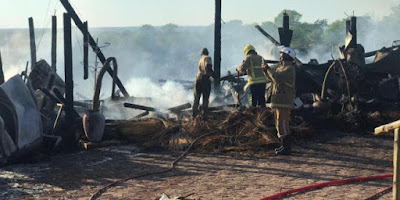 Firefighters from the Victoria Falls Municipality were called but could not salvage the wooden and grass thatched structure.
The café which is operated by Wild Horizons, one of the leading tour operating companies in the country, employs 30 people.
Wild Horizons chief executive Mr Gary Archer confirmed the incident.


“At 4:20AM on the 24th of December 2018, Lookout Café Victoria Falls was destroyed by fire. The café will be closed for the foreseeable future,” said Mr Archer.
He said no one was injured.
Mr Archer said tourism activities such as highwire activities were not affected and will continue to operate as usual.
These activities include gorge swing and gorge view, zip line and flying fox.
“We would like to take this opportunity to thank the Victoria Falls fire brigade for their speedy and professional assistance in containing and putting out the fire. Investigations are ongoing while some insurance assessors are also coming to investigate.
“We’ll go through all processes and will communicate after the findings are out but for now we are concerned about this unfortunate incident and what to do with the 30 workers who are affected. We will however start repairs soon,” said Mr Archer.
Tourists preferred Lookout Café to other eateries because it is strategically positioned facing the gorge.
Victoria Falls Municipality public relations and economic development officer Mr Ngqabutho Moyo said: “Our fire fighters attended the scene and investigations are ongoing.
“However, people need to be educated about fires and their occurrence. Some people want to put out fire themselves or drive from the premises to look for help. Residents should use emergency numbers to call the fire brigade or police.”
Source: Fire razes Victoria Falls’ Lookout cafe (27/12/18)
Image source: Fire burns to ashes Victoria Falls Lookout Cafe (24/12/18)