A bridge too near?

Interesting historical persepctives on development. From Issue 05 of the Zambezi Traveller (June 2011). 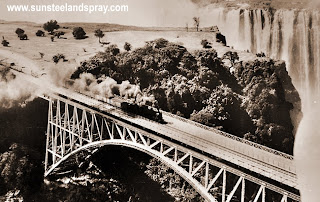 The Victoria Falls Bridge is now such an integral part of the history and environment of the Victoria Falls area that it is hard to imagine that its construction in 1904-5 resulted in much division and controversy. Many protested that the bridge was an engineering act of vandalism and should not be built so close to the natural wonder of the Falls.

A writer for Scientific American magazine, in an article published in July 1905 to celebrate the building of the bridge, recorded: "To ascertain the general feeling of the visitors on the site chosen, a book was kept at the [construction] engineers’ camp, and a very large majority of the opinions are favourable to it, many visitors being converted from hostility to approval on seeing the facts of the case – in fact, one guest goes so far as to say the following: ‘The falls in their present position cannot possibly detract from the beauty of the bridge’."

Despite objections and engineering advice in support of an alternative site upstream of the Falls, it was Cecil Rhodes’ wish that the bridge should be built "where the trains, as they pass, will catch the spray of the Falls." This was even against the opposition of his own brother, Colonel Frank Rhodes, who is recorded as saying: "Well, I have done all I could to prevent the bridge being built… and nothing is now left for me to do but pray daily for an earthquake." His prayers were almost answered in 1910 when an earthquake shook the town of Livingstone and a shower of rocks were dislodged into the gorges below the Falls. The bridge however was undamaged.

The Victoria Falls Bridge has been cited by engineers for its elegance of design and to the way it relates to its natural setting. According to the American Society of Civil Engineering, the bridge "embodies the best abilities of the engineer to enhance the beauty of nature rather than detract from it". The President of the Institute of Civil Engineers, Sir Alexander Kennedy, recorded in 1907: "The lines of the structure, themselves quite beautiful, brought out at once the vastness of the gorge itself, which without the structure could not be realized. Before the bridge was built the gorge was something very beautiful but quite indefinite, but directly that beautiful arch was put up it gave an entirely new interest to the landscape. He did not think anybody who had seen the Victoria Falls bridge would ever find fault with the engineers who designed it". Like Rhodes, one wonders how many of the actually saw the bridge in its setting with their own eyes, rather than from photographs.

The bridge soon became a popular tourist attraction in its own right, offering pedestrians, as well as train passengers, a spectacular new view of the Falls and gorges below. Today the bridge is the second most famous landmark of the region, after the Victoria Falls themselves, hosting a 111 metre bungee jump with a hair raising 80m bungee swing and 300m zip line. The recently refurbished Visitor Centre with viewing platform and restaurant and bar is located on the northern bank.

Today views on the bridge are still divided. In one recently published coffee-table book on the Falls, the authors make the following emotive statement: "Once construction is complete, it is much more difficult to remove it than if it were simply disallowed in the first place. In time it becomes an accepted part of the landscape, and eventually an object of historical curiosity. Few now would wish to see the Victoria Falls Bridge removed, but it is, in truth, a hideous monument to Victorian vanity" (Teede).

Website: Sun, Steel and Spray: A history of the Victoria Falls Bridge