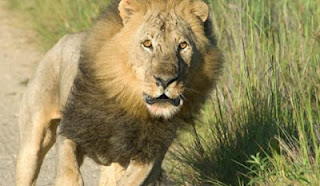 Dynamite - The Tale of the Incredible Travelling Lion

A wild male lion captured last close to Livingstone after attacking and killing cattle in the Songwe area has turned out to no ordinary lion. Initially it was reported in the Zambian Press that the animal had escaped from one of the captive lion tourism experiences in the area, but through the dedicated effort of lion researchers and the wonders of modern technology, this lion has an amazing tale to tell.

The Zambian Wildlife Authority, together with local animal vets, decided to capture the problem lion and after a successful capture on 26th January were surprised to find that they had not noticed that the animal was carrying a GPS research collar. A quick bit of checking with lion research projects in the area identified the animal as having come from Hwange National Park, some 150km south of Victoria Falls in Zimbabwe, and surprisingly, the other side of the Zambezi River.

Visitors to Sikumi Tree Lodge on the edge of Hwange National Park over the last few years will have undoubtedly have heard of, if not seen, the ‘Dynamite Boys’, a coalition of originally four male lions who were often seen in the area. Unfortunately, the group were reduced to this one remaining individual (it is believed the other three all died in snares). He was last seen in the area in December last year, having been ousted from his territory by two younger males, with nothing then known of his movements until he turned up on the edge of Livingstone on the 22nd January.

I was lucky enough to have seen this lion early last year when I had the pleasure of visiting Sikumi, and it was a special event for me, as several years earlier I volunteered for a period with Oxford University’s WildCru Hwange Lion Project, and was present with Dr Andrew Loveridge when he first captured and collared this lion as part of his research into lion populations and their movements in and around Hwange National Park.

Excited by the arrival of four young unknown males onto the local scene, the boys were prime targets for a GPS collar, which records the position of the animal every hour over periods of months and years and stores the data for transmission to portable receivers, yielding valuable data on lion movements and behaviour to researchers. The group were first found in the Main Camp area of the Park, close to a small waterhole known as ‘Dynamite Pan’, hence the adopted name of the group, and now this amazing lion, the last Dynamite boy.

Travelling Lion Turns a Spotlight on the Species

The story has two interesting post-scripts. Firstly, Dynamite was kept in a cage for nearly a year before beaurocratic paperpushers decided to release him. Unfortunately he died in transit (see link here). At his age, and after a year in captivity, it was probably doomed to failure. Shame more wasn't done to effect an early release, highlighted in my editorial at the time.

Secondly, another lion from Hwange recently went walkabout, as fearured in the December 2012 issue of the Zambezi Traveller: . Another Zambezi wanderer