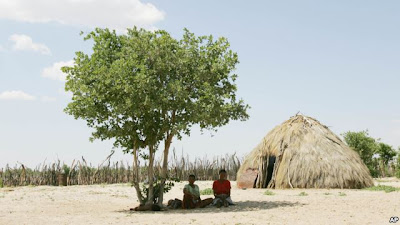 Dozens of Botswana Bushmen threatened with eviction have won a significant court victory in their struggle to stay on their land.
Since the wildlife corridor between the Central Kalahari Game Reserve and the Kgalagadi Transfrontier Park was first proposed, the local and national authorities have pressurized the Ranyane Bushmen to leave. The corridor project was promoted by the US organization Conservation International (CI) – Botswana’s President Khama sits on Conservation International’s board.
The Bushmen in fact pose no threat to wildlife, alongside which they have lived sustainably for centuries, and many believe the eviction is in fact to benefit local cattle ranchers.
Last month the local council told residents that they would be evicted in just four days, and sent trucks and police to the settlement to intimidate them. The Bushmen went to court, and obtained a temporary injunction against their eviction.
Today, in a new hearing, the court ruled that no government officials can enter the Bushmen’s compounds without their consent; that their water borehole cannot be dismantled without warning; and that the Bushmen’s lawyers must be notified before any further attempt is made to resettle them.
The court also ordered the government to pay all the Bushmen’s costs. Survival’s Director Stephen Corry said today, ‘How many court cases does it take for human rights to prevail in Botswana? Isn’t it time for President Khama to stop the evictions of the Bushmen, Botswana’s first citizens, once and for all?’
Read More:
Bushmen Want to Live in Peace on Their Land, Voice of America, 30 May 2013
Botswana’s High Court has issued an interim injunction regarding the case between the Ranyane Bushmen of Botswana and the government. It pertains to whether or not the government can remove the Bushmen to make way for what may presumably be a wildlife corridor. Both parties are set to reconvene in court on June 18.
However, Survival International, an organization that focuses on promoting the rights of people who live in tribes, reports that the Bushmen were told on May 28, that they would be forcibly removed from their land.
The NGO said that the Ranyane Bushmen, which number only several hundred now in southern Botswana, continue to be threatened with eviction from their land. This, even after the high court ruled in 2006 that the forced removals were unlawful and unconstitutional. Bushmen have since taken the Botswana government to court several times, alleging that the government continues to harass and threaten them.
The land that the Ranyane Bushmen live on lies between the Central Kalahari Game Reserve and the Kgalagadi Transfrontier Park. It is also occupied by settlers and farms.
Botswana denies plans to evict Bushmen, South Afrian Times, 27 May 2013
This week the indigenous rights group Survival International claimed that the Botswanan authorities were going to evict the community, which has lived in the southern settlement of Ranyane for generations. But Botswana government spokesman Jeff Ramsay said the allegations were false. "The government of Botswana has no plans to remove those who want to stay at Ranyane," he said.