National media reports that an additional KR10 million is needed for the construction of the Livingstone market popularly known as the 'Zim market'. Last year, government released KR28.5 million for construction of a new market site. 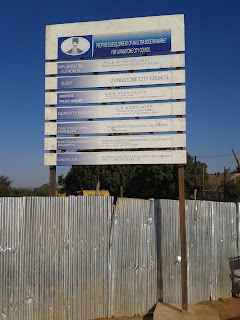 The sign and fence - the works are specified as an 'ultra modern market'.

A weekly progress report for the project states that the council has since written to government over the additional funds. Livingstone City Council director of engineering Benny Chiyesu said without the extra funding, the market would be just like any other ordinary market and not the modern facility that it was intended to be.

"The KR10 million will be needed to enhance the quality of the works at the market" Chiyesu said. Asked if the construction of the market was under-budgeted, Chiyesu said the funding was received before the drawings were done. "But the finishing time for this project still remains the same, which is 31st July 2013 and the target will be met," said Chiyesu. 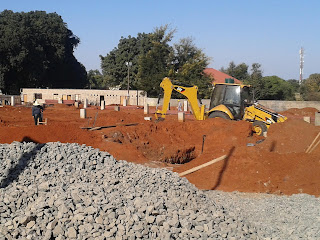 Over the fence, progress to date...

Meanwhile, construction of other projects such as roads, intercity bus terminus, public toilets and the civic centre among others is progressing with contractors promising to complete the works on schedule ahead of the United Nations World Tourism general assembly to be co-hosted with Zimbabwe in August. 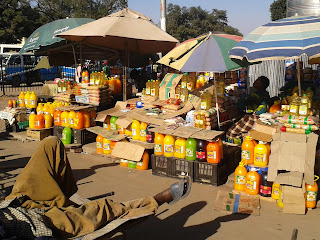 Street sellers awaiting the development of the new market area.

Relocated street vendors in Livingstone are apparently conducting business at their new trading location at the Common Market for Eastern and Southern Africa (COMESA) and the Green Market. On May 10 this year, vendors who were operating from the pavements of the Mosi-oa-Tunya road in Livingstone were relocated in an exercise spearheaded by Tourism and Arts Minister Sylvia Masebo, aimed at promoting cleanliness in the city ahead of the August 2013 United Nations World Tourism Organisation (UNWTO) General Assembly.

Livingstone City Council acting Public Relations manager Emmanuel Sikanyika said that the council was already engaged in talks with ZESCO on how and when the Green market would be electrified.