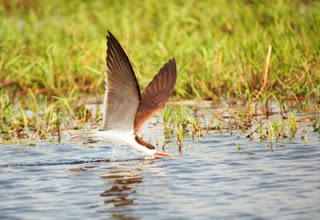 by Pete Roberts
From the Victoria Falls Guide 'archives' - from July 2011:
Migrating birds such as the African Skimmer (Rynchops flavirostris ) are arriving to breed on the freshly sculptured sand-banks which emerge from the receding Zambezi River. Despite the dangers of nesting on sand banks regularly trampled by hippo, predated by monitor lizards, and even disturbed by humans, skimmers and other birds such as lapwings and plovers return to successfully breed on the river each year.
The characteristic skimmer is an inter-Africa migrant, spending July to November on the Zambezi. A medium sized bird, long-winged and tern-like in flight, with brownish-black upperparts, white underneath and deeply forked tail, has a uniquely extended lower bill, which is noticeably longer than the upper mandible.
It has been estimated that nearly 1,500 skimmers breed along the river, representing 10% of the continent-wide population, conservatively estimated at just 15,000 birds. This highly significant percentage identifies the Zambezi as a key area of conservation importance for this enigmatic species.
Read more: Zambezi River Sand-Bank Breeders
Photo Credit: Victoria Falls Guide