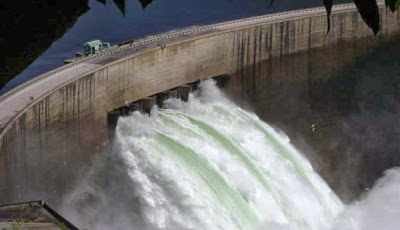 Following headlines in national media over the last couple of days the Zambezi River Authority have issued a short statement: “We would like to inform the public that the comments in the Newsday article of March 20, 2014, 'Kariba Dam wall faces collapse,' were made during a roundtable discussion with co-operating partners. Scenarios were presented on what could happen should rehabilitation works not be taken up with urgency. Please, DO NOT BE ALARMED. Measures are underway to start the rehabilitation process in the third quarter of the year. The meeting at which these issues were presented was to raise funds for the works to start around September. We are putting up a full statement shortly."
Headlines earlier this week in Zimbabwe claimed the lives of 3.5 million people were at risk following the revelation that Kariba Dam is in need of yet more urgent repairs.
According to reports the wall of Kariba Dam has developed problems and may collapse if repair is not carried out in the next three years. Felix Nkulukusa, chairperson of an inter-governmental committee mobilising funds for the dam's repair, is quoted as saying "The engineers said if nothing is done in the next three years, the dam may be swept away. An unstable foundation can wash away the dam - a potential catastrophe for the 3.5 million people along the Zambezi River mainly in Mozambique and Malawi," he said.
About US$250 million is required to repair the dam situated in the Kariba Gorge of the Zambezi River basin between Zambia and Zimbabwe. The World Bank, the African Development Bank and the European Union have agreed in principle to fund the repair.
The dam wall was built between 1955 and 1959 and holds back some 64,800 Mm3 of water in the reservoir. The integrity of the dam wall is checked each working day by a team of experts.
Sources: Three million at risk as Kariba Dam wall faces collapse (New Zimbabwe, 19/03/14)
Kariba dam on verge of collapsing (Bulawayo24, 19/03/14)