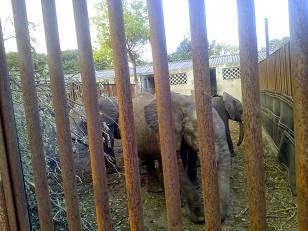 Zimbabwe - President Robert Mugabe's government said on Monday it is going ahead with controversial plans to export live elephants despite resistance from animal rights groups, the state ZBC broadcaster reported.
"We are going ahead with selling the elephants, we have done our studies and we are going to do every transaction under the [global wildlife trade treaty] CITES parameters," Prince Mupazviriho, who is the permanent secretary in the environment, water and climate ministry, told ZBC.
Up to 80 elephant calves are now believed to have been captured in Zimbabwe's western Hwange National Park since November, sparking international outrage.
The cash-strapped state national parks authority says Zimbabwe has too many elephants and it needs the money it can raise from elephant sales to fund its operations. Each elephant can fetch up to $60 000 on the international market.
Conservationists say that it is cruel to separate the calves from the rest of the herd. Activists also say that the sales of 60 to 100 calves will make a very little dent upon Zimbabwe's total elephant population, which the government puts at 80 000.
"The government is going ahead with its plans and will not be derailed by groups which do not have an understanding of the situation in the country's national parks," ZBC said in a report posted on its website.
Seven Zimbabwean elephants are already known to have been exported to the United Arab Emirates.

But the authorities in Harare confirm France has cancelled its order for between 15 and 20 elephants following pressure. China is also reported to have elephants on order.
Source:  80 elephant calves rounded up as Zim goes ahead with export plans (09/02/15)