A statue of  Cecil Rhodes, the British mining magnate and African coloniser, has been pulled down from its plinth at the University of Cape Town after a prolonged protest by students. 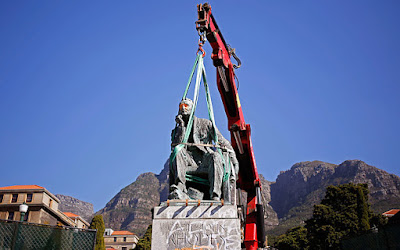 The statue, which has occupied a prominent position on the South Africa university’s rugby fields since 1934, had been previously pelted with excrement and paint and wrapped in plastic bags by those who argued that it was offensive to black students and that memories of the brutal heritage Rhodes represented should not be preserved.


The debate sparked similar protests across the country which saw a statue of a bronze British soldier who fought in the Boer War removed from his horse in Port Elizabeth, and the spray-painting of a statue of King George VI at the University of KwaZulu-Natal.
The far-left Economic Freedom Fighters political party, led by former ANC rabble rouser Julius Malema, have enthusiastically joined in with the protests, its followers daubing with paint statues of former South African leaders Paul Kruger and Louis Botha, in Pretoria and Cape Town respectively.
The vandalism prompted protests from white minority parties including Freedom Front Plus, and Afrikaans singers Steve Hofmeyr and Sunette Bridges, who sang the former apartheid anthem Die Stem in front of Kruger’s statue in Pretoria, watched by an audience of white people, some dressed in quasi-military uniforms.
AfriForum, a white civil rights group, warned that strong emotions around the debate meant that communities were becoming “dangerously polarised”.
“The Afrikaner is – from a historical perspective – increasingly being portrayed as criminals and land thieves,” the group said in a statement.
“But apartheid freedom fighters are certainly not the untainted heroes government is making them out to be.
This week, the UCT’s governing body, staff and students voted virtually unanimously for the statue to be removed temporarily, pending an application to the government body, Heritage Western Cape, for its permanent removal.
A deadline was set for the statue to be taken down by 5pm on Thursday and by late afternoon a large crowd had gathered to cheer the former coloniser’s dethroning by a hydraulic crane.
As the brooding bronze figure was lifted gently from his plinth, the crowds below erupted in cheers as several students climbed up to dance in the space the statue had cleared.
Nathi Mthethwa, South Africa’s arts and culture minister, said UCT’s students had raised a valid concern.
“For far too long our heritage landscape has been viewed through the prism of our colonisers and we have got to challenge that,” he said.
“But to come up with a blanket ban is not helpful – each statue has to be examined on its own merits because each history is not the same.” He condemned other protests where statues had been vandalised.
“We want to keep them in a museum, not destroy them, because our policy of reconciliation is that we should forgive each other but never forget,” he said.
Mmusi Maimane, the parliamentary leader of the Democratic Alliance, South Africa’s official opposition, said the statue debate was a “distraction” from the ANC’s failure to improve the lives of the majority of South Africans.
“That is the real scandal in our country,” he said. “We cannot erase history, and we cannot escape the fact that our heritage is intertwined as South Africans.”
Dali Tambo, son of the ANC’s liberation leader Oliver Tambo who oversaw the erection of a new statue of Nelson Mandela outside Pretoria’s Union Buildings, said he was dismayed by the protests.
“I would like to live in a country with a varied heritage landscape, but it must be dominated by the heritage of the majority; which requires us to create new heritage of scale that tells the story of our journey to democracy,” he said.
Frans Cronje, the head of South Africa’s Institute of Race Relations, said that while he held no strong views about whether the statue should remain or not, he was concerned by the “intolerable hooliganism” that had characterised the campaign to remove it.
“A university ceases to exist when an open culture of argument and counter argument is replaced by fear, intimidation, and racial nationalism,” he said, citing an attack on a member of staff who questioned the campaign and the singing of the struggle song “One Settler One Bullet” after the student council voted in favour.
He also questioned the vote by the university’s staff “senate” of 189-1 in favour of removing the statue, something he noted brought to mind “North Korea’s election result”.
Source: Cecil Rhodes statue pulled down in Cape Town (09/04/15)
Posted by VFBNB at 14:43