The projected cost of the proposed Batoka Gorge Hydro-electric scheme on the Zambezi River has been revised downwards from $6 billion to $4 billion. The revision comes as the Zimbabwe and Zambian governments intensified work on the project. Both Governments have since allayed fears that the proposed scheme could result in flooding in the resort town of Victoria Falls, threatening water sports. 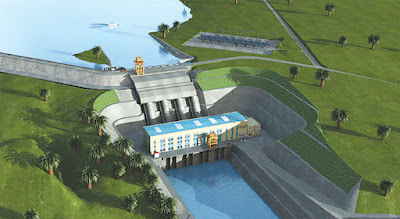 Addressing journalists from Zambia and Zimbabwe at a two-day media tour at the proposed site of the project in Kasilili Village, about 80km from the resort town, the chairperson of Zambezi River Authority (ZRA), Mr Partson Mbiriri said it had been recommended that the dam will be “a runoff river scheme.”

He said the scheme meant that little amounts of water would be stored while the rest would be released immediately to generate power. There has been an outcry by tour operators in Victoria Falls and Livingstone that if the project went ahead, they would be forced to stop white water rafting.

“There have been outcries that Victoria Falls will flood because of the dam wall to be constructed and yes we have to be careful of how high the dam wall and flow of the river would be.

“This type of a scheme is referred to as run-off river scheme meaning there would be little storage. The water will just flow through, generating electricity and that will not flood Victoria Falls. We have learnt from how the Kariba dam was constructed,” he said.

Mr Mbiriri who is also the permanent secretary in the Ministry of Energy and Power Development said the dam wall will be about 100 meters high, generating 1 200megawatts of electricity for both Zimbabwe and Zambia. He said both countries would each have a hydro power station.

“Both countries will produce 1 200 megawatts each and double the current production we have at Kariba Dam. “We however have more sites along the Zambezi River which we can utilise to produce power,” said Mr Mbiriri. He said they were looking for $4 billion to fund the project which is expected to be completed in 2024.

More on the Batoka Hydro Power Scheme
Posted by VFBNB at 21:09