Official Opening of the Bridge

The official opening ceremony for the Victoria Falls Bridge took place on 12th September 1905. One of the newest 7th Class engines in the country at the time, decorated with two flags (that of the BSAC and the Union Jack), palm leaves and flowers, pulled the six coaches which then halted on the Bridge for the passengers to alight. Mr Allan Bowes is recorded as the driver. The party was met by Major
Robert Coryndon, the Resident Commissioner of North-Western Rhodesia (later Sir Robert Coryndon and Governor of Kenya). 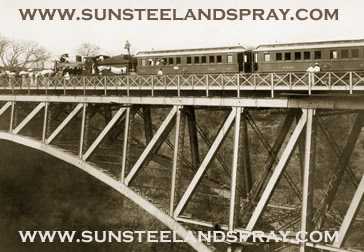 Sir Charles Metcalfe made a welcoming speech and invited Professor George H Darwin (later Sir George Darwin), President of the British Association for the Advancement of Science, now the British Science Association, to declare the Victoria Falls Bridge officially open. Professor Darwin, described the honour of opening the Bridge as the ‘crowning glory of the tour.’

The Association had been invited to the Victoria Falls in 1902, with the idea of holding their annual meeting at the Falls and plans to develop the Hotel to accommodate one hundred guests. In the event the main part of the tour and official meetings were held in South Africa, with the trip to the Falls as a special excursion. Logistics must have caused the event committee some headaches, with over 300 members and guests expected. 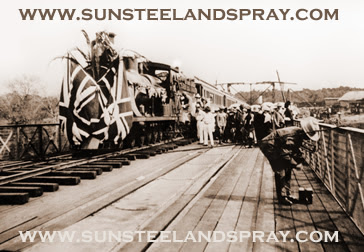 For the conveyance of the British Association party and other special guests, the Railway Company ran six passenger trains at half hour intervals from Bulawayo. The earlier trains arrived in time to enable guests to visit the Falls for sunrise. Then, after breakfast at the Victoria Falls Hotel, guests proceeded by special train to the Bridge. Those unable to travel on the train were allowed to follow onto the Bridge after the train had arrived. The following day the Bulawayo Chronicle recorded the details of Professor Darwin’s speech:

“He said it was a most fortunate coincidence that this great enterprise had been brought to a stage at which it was proper to declare the bridge open during the visit of the members of the British Association to South Africa. Thanks to the generosity and care of the [Cape] Government Railways, they had just performed an astonishing journey of 1700 miles [2,736 km] in luxury and
comfort. (Cheers.)

One could not but feel that it was almost an impertinence that they should have been able to come, in electrically lighted sleeping cars, with restaurant saloons, to a place which the heroic explorers had spent many months in fruitless endeavours to reach. This was a thing which impressed itself on the imagination. Another thing which impressed them as Englishmen was that they were still under the Union Jack. (Loud cheers.)

“But two days ago they stood by the tomb of Cecil John Rhodes in the Matopas, and, amid that scene of wild beauty, all felt that the grave of the man who had thought in continents was fitly chosen. The great enterprise of the Cape to Cairo Railway, of which this bridge is a part, was due to his inception. It seemed nothing short of a fairy tale to stand on this bridge over the Zambesi. It was due to the influence of steam that this great enterprise had become possible, and he couldn’t refrain from quoting the remarkable forecast, written by his great grandfather, Erasmus Darwin, in 1785:

“Soon shall thy arm unconquered steam, afar Urge the slow barge and draw the flying car.”

“How little could the writer of these lines have foreseen that his great grandson should have the honour of declaring a railway bridge open in the heart of equatorial Africa. (Cheers.) Professor Darwin concluded by declaring the bridge open, touching a button which fused a cord stretched across.” (Bulawayo Chronicle, 13 Sept 1905) 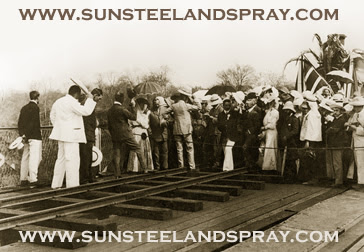 Sir Charles presented Professor Darwin with a special hand-held staff of highly polished Zambezi wood, made by Bulawayo jeweller W H Blackler, in which was set an engraved representation of the Bridge and a gold plated inscription. The staff was designed with a metal loop at the head, possibly designed to be used by Professor Darwin to fuse the connection and open the Bridge.

Many well known scientists, professors and engineers of the time were present; Sir Benjamin Baker, Sir Colin Scott-Moncrieff, Lord Ross, Sir William Crookes and Sir R Jebb to name a few. There was, apparently, much speculation between them as to the exact height of the Bridge above the water:

“There is a story, said to be well authenticated, that at the time of the official opening of the bridge one of the members of the British Association party wished to test the depth of the gorge below the bridge. For this purpose he picked up a stone and took out his watch to note the length of time taken by the stone to reach the water. Absent-mindedly he dropped his watch into the gorge and found himself examining the stone in his hand.” (Southern Rhodesia Publicity Office, 1938)

With the opening ceremony complete the train slowly drew forward amid cheers. The main group of guests alighted on the northern bank where they could explore the Palm Grove or visit Livingstone Island. The remainder of the guests visited the Rain Forest, under the guidance of Mr Allen, and then back to the Hotel for lunch, by which time the train returned with the first group and collected the second group for the trip to the north bank.

Mr E Knowles Jordan, in the employment of the Administration at Kalomo, was one
of those present on the Bridge and described a hair-raising moment for one railway
worker:

“In 1905 the Victoria Falls Bridge was officially opened, and I made one of a party to cross to Northern Rhodesia in the first passenger train. Four or five of us stood on a carriage platform looking at the scenery. As the heavy Pullman cars moved slowly along, a railwayman standing on one of the girders watching the progress of the train suddenly slipped and for a moment it looked as if he would be precipitated into the torrent far below. Fortunately, however, he managed to grip the girder and slowly drew himself into a position of safety.” (Northern Rhodesia Journal, 1951)

Guests were given voucher tickets for the train, tours and meals, issued together with a special commemorative programme. In the evening the Victoria Falls Hotel served dinner for a several hundred guests, after which trips to see the Falls by moonlight were offered.

Among the distinguished guests at the ceremony was a Mrs Agnes Bruce, wife of Colonel Bruce, and daughter of Dr David Livingstone. Another of the guests at the ceremony, a Miss Catherine Mary Phillimore, composed a rather lengthy poem comparing the majesty of the Victoria Falls and that of Her Majesty Queen Victoria, after who they were named (Rhodesia Railways Magazine, Sept 1955).

At the evening dinner Sir Charles read a telegram from the President and Directors of the Chartered Company, congratulating him on the opening of the Bridge.

“Very fitting that foremost representatives of science should be associated with inauguration of modern engineering. Regret the founder of country is not alive to witness realization of part of his great ideal.”

Entertainment was provided by the local Barotse Native Police Band:

“Music was supplied during the evening by the Barotse police band, dressed in Khaki uniforms with red turbans, not one of whom knows a note of music, and are taught by having the tunes whistled to them.” (Bulawayo Chronicle, 14 Sept 1905)

'Sun, Steel and Spray - A History of the Victoria Falls Bridge' has recently been republished in an expanded second edition, available to order online through Amazon.com and Amazon.co.uk - with shipping across the world.