On 15-17 March 2019, Victoria Falls will be illuminated in green to celebrate the Irish festival of Saint Patrick. 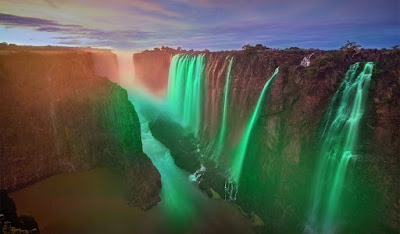 St. Patrick is the Patron Saint of Ireland and is credited with bringing Christianity to the country in the early Fifth Century. His life is celebrated on the 17th of March each year, and this celebration has become the National Day of Ireland and the most important festival in the country.
The “Greening” of Victoria Falls is another example of the close and friendly relationship between Zambia and Ireland. For Ireland, the colour green symbolizes St. Patrick and also the Irish people.
Since 2010, Ireland has been running an initiative called the “Global Greening”. In 2018, over 300 landmarks in 50 countries were illuminated in Green- this included the Freedom Statue on Independence Avenue.
This year, the Embassy of Ireland, in cooperation with the National Heritage and Conservation Commission,will include Victoria Falls in the Global Greening initiative for the first time on 15-17 March 2019.
Victoria Falls is the centre piece of this year’s landmarks, and its greening has already received extensive coverage in the Irish media. At the launch by the Irish Minister for Tourism, Shane Ross and the Chief Executive of Tourism Ireland, Niall Gibbons for this year’s campaign, the Victoria Falls were highlighted as the outstanding addition to the Global Greening.
An image of Victoria Falls was displayed during the official launch boosting, selected above other confirmed greenings such as the Colosseum of Rome, Niagara Falls, the Christ the Redeemer statue of Rio de Janeiro or the Sydney Opera House.
This Global Greening initiative is designed to promote awareness of Ireland, while also providing a platform for the host country to highlight their own tourist offering. The Embassy is very pleased that maximum exposure has been achieved for Zambia in Irish media this year.”
Source: Victoria falls to be illuminated green to celebrate Irish festival of Saint Patrick (12/03/19)