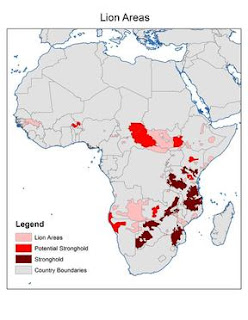 Lions in danger - 75 percent of lion habitat has disappeared
Wildlife Extra - December 2012
Lion populations becoming more and more isolated across Africa. A new study has confirmed that lions are rapidly and literally losing ground across Africa's once-thriving savannahs due to burgeoning human population growth and subsequent, massive land-use conversion. Representing the most comprehensive assessment of the state and vitality of African savannah habitat to date, the report maintains that the lion has lost 75% of its original natural habitat in Africa - a reduction that has devastated lion populations across the continent.
Source and read more: WildlifeExtra - Lions in danger - 75 percent of lion habitat has disappeared