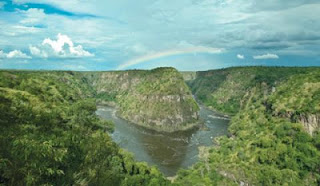 Here's an issue which I reported on in the Zambezi Traveller back in March 2012. Amazingly, in Feburary 2013 few people in Victoria Falls realise that this is very much happening. Talk of daming the Zambezi River below the Victoria Falls has dragged on for so many years that everyone is probably assuming that it is never going to happen because it hasn't happened yet. Well, it's happening - at the beginning of last 2012 the governments of Zambia and Zimbabwe agree settlement of a debt problem which had previously blocked agreement on the Batoka dam project. World Bank funding is also in place, and latest reports on the ground are that the road infrastructure to the dam building site is well on its way to completion.

There's also some background to the development here - Save the Batoka Gorge, and a summary of developments as at the September 2012, written for the Victoria Falls Guide, here. Photo Credit: Zambezi Traveller