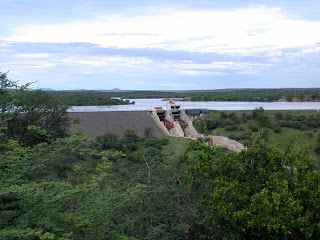 Tne Nambibian government has reopened long-term plans to divert water from the Kavango River in the north eastern part of the country to the Van Bach Dam which supplies the capital and economic hub, Windhoek.
Those opposing the idea say it will negatively affect floodwaters flowing into the Okavango Delta.
Under Secretary in the Ministry of Agriculture, Water and Forestry, Abraham Nehemia last week told natioanl media sources in Namibia that the cost of the project, should it be carried out, would only be determined after an environmental impact study.
“The feasibility study will give us a clearer picture on the design of the project and the costs involved,” he said. Nehemia said Botswana and Angola, the two countries which share the water resource with Namibia, have not objected to the idea of drawing water from the river to the Von Bach Dam. He said although the dam had adequate water levels at the moment, if the country experienced three consecutive droughts the dam would dry up.
The Von Bach Dam, which was constructed in the late 1960s and commissioned in 1970, relies on water from the Swakop River and has a capacity of 48,560 million cubic metres, suppliying Windhoek and Okahandja. In October last year, water utility, NamWater inaugurated the Von Bach-Windhoek Transfer Capacity Increase Project at a cost of N$200 million. This will increase the transfer capacity from 2,700 cubic metres to 5,400 cubic metres.
Statistics obtained from the City of Windhoek, show that the capital has been growing at a rate of between three and five percent since Independence and the demand for water supply to Windhoek has also grown proprtionately. Okahandja has also witnessed tremendous growth because of rural-urban migration as well as other developments. The City of Windhoek consumes about 20 million cubic metres per annum. Extensive use of groundwater for domestic, agricultural and industrial use has resulted in the progressive lowering of the water table.
Source: The Namibian: Long-term plan to tap Kavango river to supply Windhoek http://www.namibian.com.na/news/marketplace/full-story/archive/2013/may/article/long-term-plan-to-tap-kavango-river-to-supply-windhoek/?utm_source=feedly