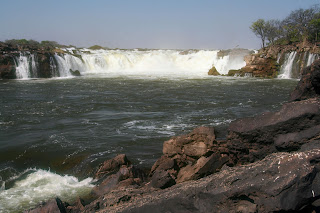 Ngonye (Sioma) Falls
Zambia's Western Power Company is looking to develop a US$200 million hydropower facility at Ngonye (Sioma) Falls, expected to generate up to 80 megawatts of power. The project will utilize a barrage across the main east bank river channel of the Zambezi and a pit-type power house.
Western Province is currently one of the least developed areas of Zambia and the coming of the hydropower plant, which will partly be funded by the Development Bank of South Africa, is expected to boost the area’s economic standing and ultimately create jobs for the local people.
Commenting on the development in local media, provincial minister Obvious Mwaliteta said Western Province was moving at a fast rate in terms of development. "The EIA ( Environmental Impact Assessment) done by Western Power was welcomed by people and the BRE (Barotse Royal Establishment)... it will create employment and the new district, Sioma, [will] benefit in terms of social corporate responsibility” he said.
He also said the government was looking at increasing revenue from tourism which would be enhanced around Sioma-Ngonye Falls with the construction of the power station. “Tourism is ripe in that place. But due to its status it is difficult to improve tourism in that area, but once we have a power station there, it will be easy” Mwaliteta said. He added the investment by Western Power Company was a realisation of the government’s commitment to allow private investors help develop Zambia. “It is our vision and our belief to bring the private sector to help us bring development where it is lacking,”.
Source: Barotse Post: $ 200m hydropower plant to develop Western Province