ZAMBEZI VALLEY ELEPHANTS IN ZIMBABWE:
HORRIFIC DECLINE IN NUMBERS SINCE 2001
4th August 2015
While the world’s media focuses its attention on illegal hunting activities in Zimbabwe, centred on Cecil the lion,  The Zambezi Society  wishes to highlight a wildlife crisis of even greater proportion -  the plight of Zimbabwe’s elephants in the Zambezi Valley:- 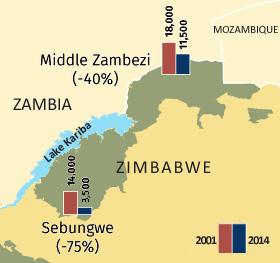 These statistics derive from a national air survey conducted by experts as part of the Africa-wide Great Elephant Census, which surveyed all major elephant populations in Africa in 2014.
Kenyan-based Save the Elephants recently highlighted a huge escalation in the demand and price of elephant tusks in China since 2002. China’s legal ivory trade, it believes, is acting as a smokescreen for horrific escalation of illegal activities which are driving the unsustainable killing of Africa’s elephants.
A recent census in Tanzania revealed a catastrophic 60% loss of that country’s elephants in just five years (109,051 in 2009 to 43,330 in 2014).  Mozambique has lost around 50% in the same period from 20,000 to 10,300.
In Africa (and Zimbabwe is no exception), state wildlife authorities are unable to provide sufficient policing and protection of wildlife areas.  The costs of protection are high, but government funds allocated for the purpose are negligible.  This gap is exploited by corruption.  Rangers on the ground, in general, are highly experienced but poorly paid.
Your support is critically needed to assist with this critical human resource and will strengthen their motivation, resolve and performance.
Says The Zambezi Society:  “We are deeply concerned by these latest elephant figures.  The message for Zimbabwe’s Zambezi Valley is clear – poaching is rife and we need to do something about it urgently.”
As a follow-up to the Zimbabwe elephant census, two anti-poaching workshops for the Middle Zambezi and the Sebungwe areas took place recently.  The Zambezi Society attended both and now sits on the Task Force steering committees for  each.  The Society has committed itself to work with Zimbabwe’s Parks and Wildlife Management Authority (ZPWMA) to act on certain of the prioritised actions resulting from these deliberations.
The Society has a Memorandum of Understanding with ZWPMA and a 30-year-old history of working with the Authority, other NGOs and the private sector to assist in combating anti-poaching in the Zambezi Valley.   Funds channelled via the Zambezi Society are fully accounted for and used in the most effective way possible.
Please help us to strengthen our anti-poaching efforts in the face of this elephant crisis by making a contribution via The Zambezi Society’s secure online payment system  or via the newly-formed, collaborative  Zambezi Elephant Fund  of which the Zambezi Society is a partner.