Cape Town - A dozen biplanes taking part in a Vintage Air Rally (VAR)  are bound for a Cape Town Grand Finale on the 16th of December, having just done a world first fly-over the Victoria Falls. 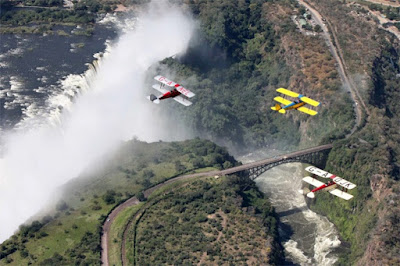 The Vintage Air Rally has in just under a month been following in the footsteps of the pioneering flights of the 1920s – which connect some of the most beautiful and evocative points in Africa.

It is the largest group of vintage biplanes to attempt the journey across Africa, with teams from a dozen countries including Britain, Canada, France, Germany, South Africa and the United States.

They've flown low along the Nile from Cairo to Khartoum, past the highlands of Ethiopia, the plains of Kenya and the home of African aviation in Nairobi.

Their journey has taken them past Kilimanjaro into the Serengeti – and on to the spice island of Zanzibar.

And now after crossing Zambia to Victoria Falls, and being met VAR arrived in Bulawayo and met by the Matabeleland Vintage & Classic Car Club in Bulawayo, they're set to end their journey in stunning Cape Town.

One of the pilots, Mark Oostingh, posted to the ZS-DNP VintageAirRally Crete2Cape Facebook page saying, "The flight over Vic Falls was not cleared for low level flying initially but yesterday (Thursday) we were cleared for less than 500 ft over them. It was an iconic flight.

According to Oostingh they formed a 3 ship formation with 2 Travelairs over the falls and did a pass at 200ft, all being filmed by the Antenov camera ship and the helicopter. Click here to see the footage

"Flying over the Vic Falls at 6000ft above sea level. (The wavy quality is due to the prop wash). We were not allowed any lower. Today, as the Vintage Air Rally leaves Zim, they are permitted to fly over the falls again but they have to be BELOW 500ft above ground level. That should be amazing. The water level is quite low but standing in front of it is still spectacular."

The rally is working with the charity BirdLife International to raise awareness about the plight of the African vulture, with seven out of its 11 species currently on the edge of extinction. Each pilot is matching themselves to an endangered vulture, and each landing en route will highlight the issue.