Christmas Past at the Victoria Falls

This is an extended version of an article which was first published in the 2015 Christmas issue of the Zambezi Traveller, available to download (together with this year's Christmas issue and all past issues of the publication) here.

A Christmas trip to the Victoria Falls has been a tradition for many since the railway opened the Falls to tourism in 1904.

The first recorded excursion was arranged from in December 1903, six months before the railhead actually reached the Falls, and before either the hotel or bridge had been erected. The group would have travelled by train to Hwange, which had been reached by the construction gangs earlier in the same month, before travelling onward to the Falls by horse-driven coach service for the remaining 68 miles to the .

An early source recorded; "...travellers to the Zambezi were informed that the round trip from would take twelve days. The management of the Grand Hotel, Bulawayo, packed attractive baskets of food, but as fresh meat would not keep indefinitely, tourists were counselled to shoot giraffe and hippo... enterprising fishermen could add to the larder by catching tigerfish - 'an appetising dish.'"

The Christmas party would have camped at the Falls, perhaps near the Big Tree, a popular meeting point in those early days. All hunting and shooting, was prohibited within a five mile radius of the Falls in an effort to protect and conserve their natural beauty, as indeed was the construction of permanent buildings. This did not stop the Railway Company, however, from erecting a small wood and iron hotel overlooking the gorges and rising spray of the Falls. 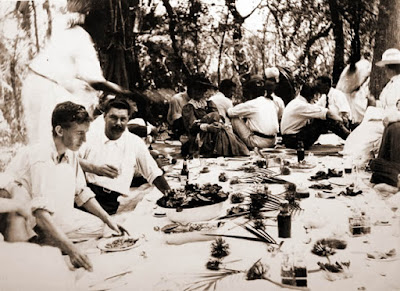 Christmas 1904 would have seen a slightly different scene, with the railway at the Falls and the Victoria Falls Hotel six month's old. Construction of the was well underway. The gorge was connected by means of a cable transporter system, with electric conveyor, to ferry people and materials to the northern bank, and a large number of European engineers and railwaymen were based on both sides of the Falls.

A well-establish American publication recorded: “That tourists are now making their way to this spot in Central Africa to see for themselves the eighth wonder of the world, as the Victoria Falls have been rightly termed, is made clear after a chat with the present hotel proprietor. Last Christmas there were considerably over a hundred persons staying at the hotel, many of whom had to sleep in tents and temporary annexes, so crowded was the building itself.”

To entertain the crowds a Christmas sports day was held, with live music provided by a band from , and lunchtime picnic under shade of Palm Grove. 'Sport' events included several horse races, tug-of-war, a 'walking race,' the very popular 'bun and treacle race' - which involved the eating of a series of buns, made by local Livingstone baker Smith & James, covered in treacle and hung on strings - and the 'water bucket challenge' where the participant had to remove a pole without tipping a balancing bucket of water and getting soaked, all whilst passing underneath in a wheel barrow (as shown in 'Old Frontier Life in North Western Rhodesia, by Shepherd, 2013).

Christmas day at the Victoria Falls Hotel would have been a memorable occasion. The manager, Pierre Gavuzzi, was an Italian, the chef was a Frenchman, the barman came from Chicago, and the waiters mainly Indian. With Gavuzzi's reputation for fine cuisine, the menu would have been superb, with fresh foods supplied by train from Bulawayo and beyond, and would have no doubt included strawberries, which Gavuzzi grew on a plot near the Hotel. The dining room, in those days a converted railway shed, had its own electric lights and fans, and hot and cold water added to the comfort of guests lucky enough to be staying in one of the hotel's twelve rooms.

Ten years later in 1916 and a more sedate Christmas was spent in the nearly completed new brick buildings of the Victoria Falls Hotel. The buildings, which were to replace the original iron and wood hotel, were near completion but not yet furnished or officially opened.

One of a handful of guests in the old Hotel buildings at the time recalled how the manager cleared a corner in the new dining room and served Christmas dinner. This was the first meal served in the Hotel's current dining room, now known as the Livingstone Room. The room was designed to echo some of the features of the original railway shed which had so famously served as the Hotel's first dining room, including the high oval ventilation windows.

These days Christmas is an altogether busier affair, and if you are lucky enough to be staying at the Hotel or in the Falls, pause to think of those first early travellers, camped under the stars under the rising spray from the Falls, and be thankful you don't have to catch your own Christmas dinner!