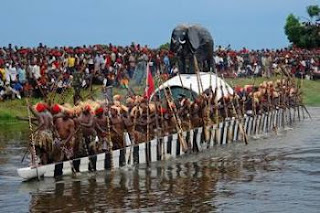 
The long awaited Kuomboka ceremony of the Lozi people will take place on April 20, according to the Barotse Royal Establishment (BRE). The date was announced on Wednesday by BRE through Induna Inete who was at the Royal Kuta in Limulunga Induna Inete said preparations for the Kuomboka were progressing well and the event was on course.

The Zambian Post reported that the royal establishment wanted a peaceful Kuomboka Ceremony and that no political rhetoric or attire would therefore be allowed. "This is not a time for someone to come and say 'we are winning in 2016'," Induna Muyumbana said. "This is not an occasion for people to say 'I belong to Linyungandambo or to MOREBA'."

He said this year's Kuomboka ceremony should be an opportunity for certain interest groups in the Western Province to forge links with the BRE and ensure a successful ceremony. "The date has been announced. Let us come together and take our culture forward. This is our thing, it is our heritage," Induna Muyumbana said. Induna Muyumbana further asked those harbouring hatred towards Litunga Lubosi Imwiko II to desist from such tendencies as they may earn themselves a curse.

Zambian Watchdog reported that tension has mounted among the Lozi following the announcement. Reports from Mongu say that people were not ready for the ceremony, and could not celebrate when there are many issues that remained unresolved, such the breaking away from Zambia.

In an interview with the Daily Nation, Linyungandambo secretary Ilukena Mukubesa expressed worry that people wanted to take advantage of the situation in Western Province for their own personal benefit. Mr Mukubesa charged that the people of Barotseland were not ready for the ceremony because of the anxiety and fear that had arisen.

He explained that the issue of Barotseland [independence] had left much to be desired, and as a result people were not happy. “ ...people are not happy with what is going on, and we are aware that people want to bring confusion during the ceremony. We really don’t want confusion in the area,” he said. Mr Mukubesa said the victimisation and intimidation of the people of Western Province had raised tension that had left the people of Barotseland with fear.

But sources in Limulunga have disclosed that the ceremony might be called off because many people close to the royal family were against it. The source further stated that the date for the ceremony was meant to blindfold people. “It is really difficult to have Kuomboka and even the royal establishment knows that. Ever since in the history of the Lozi the ceremony has never been held this late. Even the water levels have gone down... more in three weeks time,” the source said.