Security was tight yesterday when Litunga Imwiko II accompanied by Vice-President Guy Scott kicked off the Kuomboka ceremony of the Lozi people in Mongu.

Several security officers surrounded the Litunga's palace while others positioned themselves on the periphery of Lealui Royal Village following threats of subversive acts by individuals opposed to the holding of this year's ceremony. Western Province police commissioner told The Post on Friday that some unknown individuals had been distributing flyers in Mongu discouraging people from attending this year's Kuomboka ceremony.

However, all was calm and serene when Vice-President Scott, who represented President Michael Sata at this year's ceremony, touched down at Lealui in the company of his wife, Charlotte, and was received by the acting Ngambela, Siisi, who is also Induna Kalonga within the Barotse Royal Establishment (BRE)...

Litunga Imwiko and Vice-President Scott came out of the palace shortly after 11:00 hours and walked to the Nayuma Harbour where they boarded the Nalikwanda after a very short formal activity, where the Litunga was bidding farewell to Lealui Royal Village.

Police officers from the marine unit were on hand to ensure that there was order along the waterway between Lealui and Mongu. 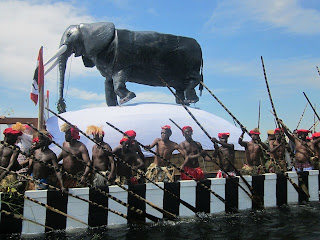 ...Vice President Guy Scott last night failed to read a speech on behalf of [President] Michael Sata and... abruptly ended the Kuomboka ceremonies saying he was too tired to continue with proceedings which took close to ten hoours from the time Litunga Lubosi Imwiko boarded the Nalikwanda in Lealui.

And in a dramatic development some Lozis opposed to the Litunga’s selfish and poor style pushed a dog at the receiving end of the canal just some few minutes before the the royal convoy arrived, while reliable sources from Lealui palace have told the Zambian Watchdog that some of the usual traditional drummers and paddlers of the Nalikwanda refused to perform their duties forcing the Litunga and his organising committee to pay for some paddlers and asking late Litunga IlLute Yeta’s two children to play the drums on the royal badge.

Scott, who was attending the ceremony for the first time as vice-president earlier delayed the ceremony at Nengwana where he is said to have asked the Litunga to make many turns around the Island in a tourism fashion for himself and his wife Charlotte. The Litunga only entered the Limulunga palace after 19:00hrs by which time Scott was too tired.

After reading a few lines of the speech that was initially supposed to be read by Sata, Scott told the gathering that it was too late to go through the speech but he would leave it and still be open for discussion. “Your royal Highness my government is committed to assisting traditional ceremonies like the kuomboka as they help maintain cultural heritage and are a tourism attraction,” said Scott before he excused himself to take his seat. Earlier he was seen making indications to the Litunga that he was tired and time was running out, making the Master of Ceremonies to shorten some of the procedures of the hastily organised ceremony.

Some traditionalists spoken to said it was not in order for the programme to be conducted in an alien manner just to please the Veep who was partly the causer of the delay. “We spent a lot of time in the water because he wanted to entertain himself and his wife, but at the end he decides to say it is too late to read the speech and shortens the programme,” said one of the traditionalists present.