Too many elephants in African parks?

Source: www.aljazeera.com
Date: 21/04/13
Opinion by William G Moseley
Do high elephant numbers drive down total biodiversity, including other types of wildlife which tourists come to see? 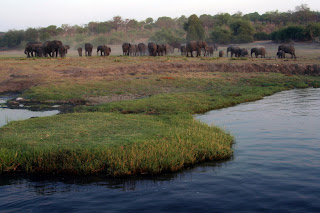 Photo Credit: Pete Roberts
International environmental organisations have been working in southern Africa for decades to support parks and conservation efforts in the communities adjacent to them. While these efforts have been beneficial in some areas, an obsession with the protection of certain high profile species, such as the African elephant, has actually been counter-productive in some cases. While the numbers of African elephants are declining globally - and these animals certainly deserve protection in many regions - in other areas their numbers are so high that they are causing overall declines in biodiversity.
Botswana's Chobe National Park covers approximately 11,000 square kilometres and has an estimated elephant herd of 70,000. International visitors to the park are often treated to an amazing scene of hundreds of elephants bathing in the Chobe River or frolicking on nearby plains. But biologists estimate that the park actually has seven times the number of elephants it can reasonably support over time. The result is a landscape within the park that is heavily degraded as elephants - while a delight to those on photo safari - are incredibly destructive as they uproot trees and trample vegetation. High elephant numbers also drive down total biodiversity, including other types of wildlife which tourists come to see.
International conservation agencies have been working with communities around the Chobe National Park to encourage the conservation of elephants. In exchange for cooperation in elephant conservation, local communities receive a share of ecotourism revenues as a reward and to compensate them for crop losses due to raiding elephants. While support and collaboration with local communities is good and only fair, especially considering the costs people endure by living close to wildlife, the goal of protecting elephants at all costs seems misguided in this situation.
...So why do international conservation organisations and some governments, like that of Botswana, persist in the excessive protection of some sub populations of elephants even when it is bad for biodiversity and local livelihoods? The answer varies from an irrational obsession with - and narrow focus on - certain high profile species, to a more legitimate concern that the culling, or controlled killing, of elephants in some areas may foster hunting in other areas where elephant numbers are low.
Animal rights activists also decry the killing of any wildlife, much less elephants which are known to have strong familial bonds and mourn the loss of deceased members. Still others believe that culling will depress ecotourism revenues, either directly through a diminished safari experience or, indirectly, when international protests over controlled elephant culling dissuade tourists from visiting certain countries.
...Global conservation organisations, some governments and ecotourists must move away from a paradigm of preservation at all costs of certain high profile species and adopt more of an ecosystem perspective. We must also realise that some species may be endangered or threatened at the international or regional scale, but actually exist in too high a number in some parks and conservation areas. This blindness to "too much of a good thing" is often detrimental to the livelihoods of rural people who live near parks, diminishes the ecotourism experience, and destroys biodiversity, the very objective of conservation.
William G Moseley is a human-environment geographer and professor at Macalester College in Saint Paul, Minnesota. He formerly served as a visiting scholar in the Department of Environmental Science at the University of Botswana, Gaborone.
Read full article here.