A Confusion of Stripes 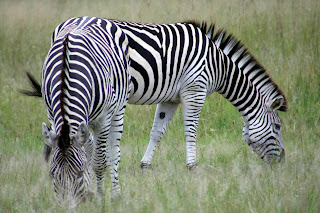 Image by Peter Roberts
Written by Peter Roberts for the Zambezi Traveller
When it comes to the zebra’s stripes, it’s not all black and white...
The stripes of the zebra’s coat are one of the most distinctive and recognisable of all African animals. For many years scientists have hypothesised as to their purpose – temperature regulation, camouflage, or even to confuse predators - stripes were thought to confuse large carnivores. However, whilst recent research has provided evidence that the stripes deter biting insects, confusion over the zebra’s stripes is not just limited to their function, but also form.
Read the full article (there's much, much more!) in the March 2013 issue of the Zambezi Traveller here

Email ThisBlogThis!Share to TwitterShare to FacebookShare to Pinterest
Labels: zebra