However, data from the Katima Mulilo Hydrological Station, upstream of the Victoria Falls and the Caprivi Swamps, showed a far more dramatic rise in river levels in late January, with the river rising to higher than average for this time of year and following a similar rise to 2011 when river levels rose early and quickly (but then subsided into a lower than average maximums). Indeed rises at Katima Mulilo can be up to four times that experienced at the Victoria Falls, emphasising the regulatory effect of wetlands and their importance in controlling natural flood patterns. The Caprivi Swamps absorb and store excess floodwaters, much like a sponge, releasing them slowly and steadily downstream. The corresponding reduction in flow can be up to seven times higher at Katima Mulilo than at the Victoria Falls, as the swamps slowly release stored water, reflecting the importance of the Caprivi Swamps in regulating flow downstream to the Victoria Falls and preventing dramatic, and destructive, flood events. Without them, the Falls would experience even more dramatic fluctuations in level, rising quicker and higher than presently, and accordingly dropping quicker and more dramatically, and the rapid below even more treacherous. 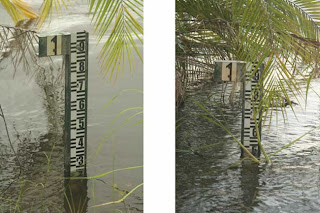 At the same time as increasing in volume, the speed or flow of the river increases. The flow at the Victoria Falls Hydrological Station as at 3rd February 2013 was 1,459 metres cubed per second, which is about 44% higher than the flow recorded last year on the same date when water levels were also significantly lower by comparison.