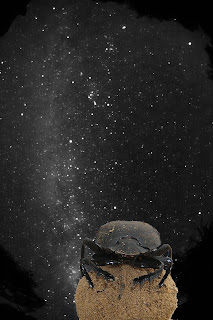 Under stary skies...
New research in South Africa has indicated that dung beetles use the light from the Milky Way to orientate themselves when collecting dung. It has previously been established that dung beetles use polarised light from the sun and moon to orientate themselves on the ground and in flight, but researchers were intrigued as to how the insects managed to navigate on moonless nights.
Dung beetles are highly competitive when it comes to dung which, as their name suggests, is a major feature in dung beetles lives. Only about 10% of dung beetle species are 'rollers' - the rest are burrowers, or 'tunnellers', who live underground, or even 'dwellers' who spend their live, literally, in the shit. It is usually the males which collect ball shaped amounts of dung which they quickly roll off to a secure location. Dung balls are used as a food source for adults and young.
Fresh dung is usually found in random, but concentrated, amounts, and can attract a lot of attention from other dung beetles of the same, or other, species, all wanting a piece of the action. For a male with a suitable ball of dung, it is imperative he exits the stage with his prize as soon as possible, before other males attempt to steal his carefully selected and crafted dung ball. To maximise their chances, males retreat in a straight line away from the centre of attention - no easy task when pushing a ball of dung as big as yourself - backwards.
Using the African dung beetle, Scarabaeus satyrus, (one of an estimated 6,000 species of dung beetle in the world, 2,000 in Africa and 800 in south Africa), researchers found that rather than using specific individual stars for orientation, the beetles used the wider Milky Way as a reference to navigate their way around.
The study by Dr Marie Dacke of Lund University in Sweden is published in the journal Current Biology and used field experiments and even tests with beetles in Johannesburg planetarium. In the controlled tests the beetles performed equally well under a fully starlit sky and one showing only the Milky Way. When researchers strapped visors to the beetles to block out the sky entirely, they were completely disoriented.
"Dung beetles are known to use celestial compass cues such as the sun, the moon, and the pattern of polarized light formed around these light sources to roll their balls of dung along straight paths," Dr Dacke said. "Celestial compass cues dominate straight-line orientation in dung beetles so strongly that, to our knowledge, this is the only animal with a visual compass system that ignores the extra orientation precision that landmarks can offer... The dung beetles are not necessarily rolling with the Milky Way or 90 degrees to it; they can go at any angle to this band of light in the sky. They use it as a reference." Indeed, in the field, the researchers found the beetles run in to trouble when the Milky Way briefly lies flat on the horizon at particular times of the year.
Whilst celestial navigation has been shown in birds and some mammals, these are thought to be the first insects to be found to use these techniques; "This finding represents the first convincing demonstration for the use of the starry sky for orientation in insects and provides the first documented use of the Milky Way for orientation in the animal kingdom."
Previously it was assumed that insects could not use the stars because their compound eyes did not have the resolution to see points of light, but navigating using the plain of the Milky Way does away with the need to see individual stars. The question is how many other animals might use similar night-time navigation. The Lund researcher is sure there will be more discoveries to come. "I think night-flying moths and night-flying locusts could benefit from using a star compass similar to the one that the dung beetles are using," she said.
For more on Dr Dacke's research see here.
Article reference and abstract can see seen here.
[Image Credit: Current Biology, Dacke et al.)]