The secrets of Hwange’s zebra 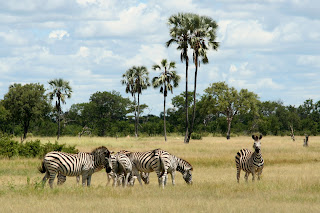 The Hwange Environmental Research Development programme of France’s National Centre for Scientific Research, run by Dr Hervé Fritz of the Lyons University, has been researching the dynamics of the Hwange ecosystem, covering the National Park and the community and Forestry lands nearby, since 1999.

Elephants dominate the ecology of Hwange, accounting for over ninety percent of the Park’s large herbivore biomass. Medium sized herbivores, such as zebra, occur in much lower population densities than those recorded in most other African systems. The Hwange zebra population density is one fiftieth of the density recorded in Serengeti.

Monitoring changes in populations involves identifying and following the life histories of individuals, and with zebra the researchers have a key to identifying each animal – its stripes. The exact pattern of the stripes on each zebra are unique, much like the human fingerprint or a bar-code.

Working from photographs, researchers are able to identify and monitor individuals within the population, allowing the project to follow the life histories of some 250 zebra over nine years. Through this work the team has been able to build up information on survival rates, reproductive patterns and harem dynamics.

The project has identified high mortality rates for foals and two to three year olds and is currently working with the Hwange Lion Research project looking at predation and other causes of mortality.

The researchers have also identified interesting social dynamics within the Hwange zebra population. Zebra stallions maintain harems, and Hwange’s social structure has been found to be more unstable than elsewhere. In Hwange it is unusual for a female to stay with the same male for more than three years, and as stallions are known to kill foals sired from previous mates, the team is now investigating infanticide rates within the population to see if this increased social fluidity has an unexpected cost in foal mortality.